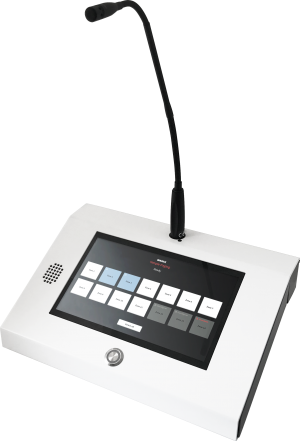 The Barix Paging Station Annucicom PS Touch is a universal, TCP/IP connected intercom station for use in IP Intercom, Paging and VoIP applications. The station can be used as a master station for IP based intercom and paging systems, which can be built without any central servers or PCs. The PS Touch directly connects to the network via a 10/100Mbps network connection, and is powered over the network interface (PoE, 802.3af standard).

Designed in Switzerland and being used in thousands of mission critical paging and intercom applications, the Barix Annuncicom series is the product of choice for IP based Paging, Intercom and VoIP applications worldwide.