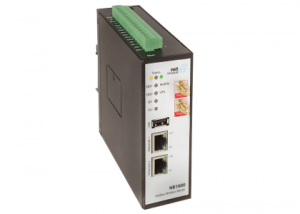 The NB1600 WIAP supports multiple wireless networks and connects
them to the Internet via 2G/3G or 2G/3G/4G.In addition all NB1600 core
functions are available: digital I/O, USB and serial gateway, SDK, VPNs
and many more.
The Wireless Internet Access Point (WIAP) provides wireless internet access
for other devices. With the Multi-SSID function several separated WiFi
networks can be operated at the same time. In multi-WAN configuration,
the device operates as a least cost router with automatic fall back in case
of a failure. In this case the WiFi interface is configured as a client and one
Ethernet port is connected to a local network.
In its role as device server the NB1600 converts both, the serial and the USB
interface to IP, enableing remote access to these interfaces. Any PC with IP
connection to the router can use the remote USB or RS-232 device as if it was
directly connected. This setup allows using the original driver. Digital I/Os can
be configured by local or remote devices. Based on input port state changes,
applications can be informed and e.g. an SMS is sent to a group of numbers.
The SDK allows users programing the NB1600 using a simple script and
implementing all kind of applications. Preprocessing can be done directly on
the router, thus saving an additional IPC.
Other features and services are DHCP server, DNS proxy, Dynamic DNS
Agent, SNMP agent, Telnet server, SSH server, Web server, e-mail and SMS.
The router is operated by the Web Manager or via command line. Firmware
and configuration updates can be easily performed from remote in a fail-safe
manner. The SNMP interface allows integration of the Router in a network
management system for supervision.